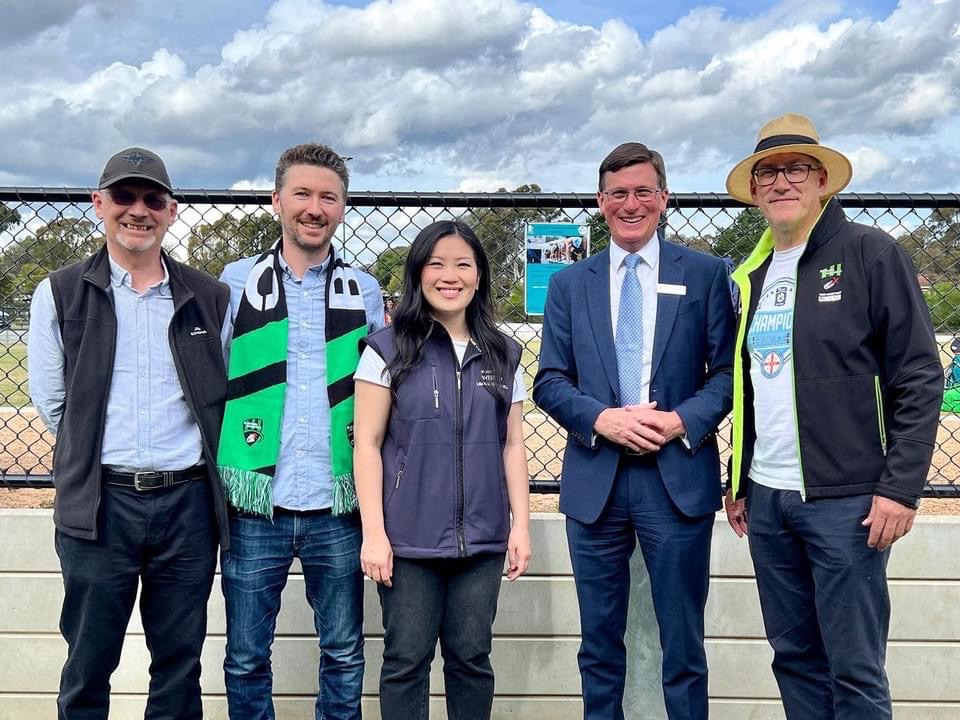 Blackburn NewHope Football Club has been advocating for a clubroom facility upgrade in partnership with the co-tenant club Blackburn South Cricket Club. The recent Federal election led to both major parties making funding commitments to support the upgrade. The Federal Labor party has committed $2 million to supporting the upgrade.

A looming State election in November has again presented an opportunity to advocate for support for this project. On Friday 21st October State Liberal Candidate for Box Hill Nicole Ta-Ei Werner and Neil Angus MP Candidate for Glen Waverley visited the clubrooms at Mirrabooka Reserve to announce $2 million of support from the State Liberal Government if they are elected at the next State election. Representatives of BNFC Alan Clark, Stu Baird and Rendle Williams were in attendance for the announcement.

The clubroom upgrade is a much needed development for the Mirrabooka reserve and will allow for a more female-friendly sporting environment as well as a greater community space for the soccer and cricket clubs.

BNFC has had a great 2022 season with the senior Men’s team winning the VCFA championship as well as the Parry Shield and a number of other Senior and Junior teams winning their respective championships. Lance Blythe (2022 President) and Richard Taube have supported the development of an Operational Leadership Team at the club which has empowered a number of volunteers to thrive in their respective roles.

We are very keen to invite all NewHope people to pray and consider if God places BNFC on their hearts as a service opportunity in 2023. There are a variety of roles from chaplaincy to administration, canteen to line marking or even bi-monthly soup nights where volunteers from NewHope church could have a significant impact on the large and diverse community at BNFC.

We would love to speak further with you if you have interest in being a part of the BNFC community in 2023. Please email Lance – lance.blythe@newhope.net.au

Our final giving outcomes for 2022 fell just under the budget goals for our NewHope Local (Ministry) Fund at 96% and Tax Deductible Fund at 94%. The NewHope Global (Mission) Fund also ended the year behind by 85%. To see the full numbers of where we landed, please...

END_OF_DOCUMENT_TOKEN_TO_BE_REPLACED

Summer Missions: Thank you for your Prayers!

Over Summer, many of our NewHope young adults spent their holidays serving on missions such as CYC camps, SUFM beach missions and ESA camps. Kent Pittendrigh Smith served at SUFM in Portland with a team of over 90 others. They ran kids' holiday programs, a cafe space...

END_OF_DOCUMENT_TOKEN_TO_BE_REPLACED

Want to get connected?